Good Things Come to Those Who Wait

As many of you know, MD & I go to millions of weddings, celebrate millions of engagements for our friends, are now starting in baby shower season for those friends of ours who are already married.  I have been super excited for each and EVERY single one of my friends who has been celebrating one of these joyous occasions but at the same time I have also been getting increasingly frustrated and wondering when exactly it was going to be MY time.

Well folks, it has been 6 years of waiting, knowing deep down in my heart that I was with the guy that I was going to spend the rest of my life with, and it FINALLY happened for me! 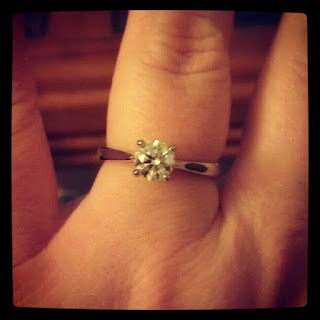 On November 15, 2012... 6 years after we started dating MD finally popped the question, and as much as I have been waiting for this day to happen, I was still in shock and didn't believe he was actually asking me to marry him!

Since I have been waiting for this day forever, you all know I had envisioned it happening in a certain way, I had expected that I would feel a certain way, and I was absolutely positively certain that I would cry. That my friends is not at all how it happened, so let me share with you what for me seemed the absolute BEST way that MD could have ever proposed to me.  And if you ask MD, he'll tell you that my reaction to the whole thing (now this is in his words), is that I was "dumbfounded", yes that is right, he thinks I was dumbfounded.

Thursday night I had to work at Friday's like usual.  I decided not to request off for our anniversary because a) I didn't think that MD would, b) it was my week to leave early and c) we were going away for the entire weekend so I figured I should get one last night of work in.  I had a horrible night at work... we weren't busy so we were making no money, PLUS I found out that I had to work the Wednesday before Thanksgiving and I already had plans that night to see a bunch of my friends, get my hair done, etc. because well my schedule is supposed to be Tuesday, Thursday, Friday, and Sunday at Friday's.  But whatever, I was going to go home and try to relax with MD and salvage the rest of our anniversary.

I go home, immediately change into my candy cane flannel pajamas (I don't care that it isn't Christmas season yet, these pjs are so comfy that I wear them all year round, especially when I am in a bad mood) while Mark heated up dinner.  Dinner was a totally romantic one of leftover chicken marsala (I had made that for dinner on Wednesday night) for MD and Wegman's chicken corn chowder for me.  After we ate we were just kind of chilling on the couch watching TV... Elementary to be exact...and he asked me if I was ever going to give him his presents.  I said sure, I would get them on the next commercial break.  So at the break I go upstairs and get his presents and he opens them.  I got him this really cool Flyers wall art to hang up in the living room (we are in the process of hanging pictures and actually decorating our apartment a bit more... only took a year), plus tickets to go see a Hershey Bears AHL game (someone is depressed that there is no NHL season).

Then he asked me if I wanted my gifts, so in a typical me fashion I told them he could give them to me whenever.  He could give them to me that night, the next day, at the end of our trip, whatever.  I was just excited to be spending time with him and happy that he liked his gifts. At the next commercial break MD ran back upstairs and comes down with his fists out holding something in each hand.  He opens one hand and give gives me a homemade heart ring and says something to the effect of "I know you hate heart rings." Then he opens the other hand and says something to the effect of "Here is a dollar bill diamond ring."  My first reaction to this ring was "Is this why you asked me for a dollar bill the other day?! You were going to give me an anniversary gift made with my own money?!"  MD of course was just kinda like yes that was why I asked, but then I found out that I had my own dollar so I gave you yours back.  Now I'm sure you are thinking, he gave her two fake rings and she had no idea that he was going to propose, how is that possible?!  Well, friends, it is definitely possible because for the past few weeks he has been making engagement ring jokes, so I didn't really think anything of this. I mean this is the guy who when we were at the grocery store told me he was going to buy carrots so he could give me a "Six Carrot" ring.  Plus, I thought my gift was our weekend away, so I didn't think much of it all.

About 5 minutes later I realize he hasn't given me a card... and he ALWAYS gives me a card because let's face it friends, I am obsessed with greeting cards. So I ask him where my card is and he goes and gets the card and a box out of his lunch box... yes my dear friends, he hid my engagement ring in his LUNCHBOX.  I'm reading the card and I get to the end and I am so super confused.  Those of you who know me know that I am a super quick reader, so I must have read the end of the card like 3 or 4 times before I actually looked at MD because I wasn't if what I thought was happening was really happening.  The end of the card reads, "I realize that I threw a big wrench in your master plan for life, but maybe it can get back on track.  Maybe ring one and ring two were too corny, so how about #3? They say that the third time is the charm, and without further ado... I do, do you?" and then he gave me the last ring.  I was seriously so surprised I didn't know what to do.  I kept looking at the card, the ring, and then him... card, ring, him.  Then I think I told him that I loved him... repeated the process of looking at the card, the ring and then him.  Then I asked him if he had talked to my parents and of course he said yes... so then I repeated the process of looking at the card, the ring and then him.  And then finally I asked if we could put the ring on my finger and he said something to the effect of, "I take that as a yes?" and I finally put the ring on! 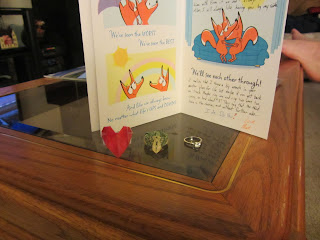 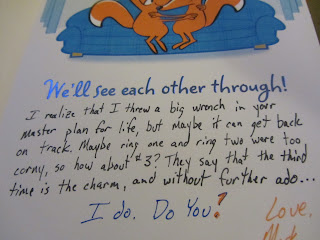 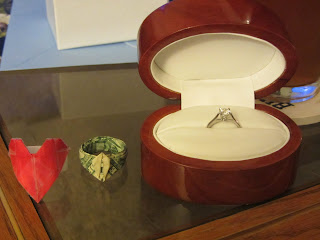 For us it was seriously the absolutely PERFECT proposal.  It was intimate in that it was just the two of us... and it really was in a way how I imagined it.  Although in my mind I would have seen in coming, and this totally took me by surprise!

I then spent most of the rest of the night calling and texting family and friends to let them know our good news.  I was too excited to sleep and just so excited to be sharing my story with everyone.  Finally I was able to go to bed... and it was a good thing because we had a long and fun weekend planned in Williamsburg!  It seriously was so awesome that Mark planned a trip and that we were able to be in an "engagement bubble" for a few days by ourselves before having to deal with reality and wedding planning!

I am still currently floating on cloud 9 and probably will be for another couple of weeks or so.  I am loving being engaged and loving now being able to share in all of my excitement with my friends and family.

Good Things Come to Those Who Wait!!
Written by Unknown at 11:22 AM 1 comment: