I'm Getting Married... THIS YEAR!

Almost daily I have people asking me "So... when are you guys getting married?" and I respond with "October 19th next year... wait I mean this year."  It seems so surreal to me that it is already 2013 and that it is the year that I get to marry the love of my life.  I feel like I have waited sooooooo long for this moment to get here that I just can't believe that it is actually almost here.

As I sit here at my computer, drinking a glass of wine, listening to the Wicked soundtrack I really just can't believe that this is my life. I have dreamed about getting married forever and for the past few years I dreamed about my perfect wedding to MD.  Though I have dreamed about this for so long, planning it has not been as easy as I thought it would be... it has been a journey, a journey that still has another 8 1/2 months left in it.  Some days I wonder if I will survive it all.  Although through it all I just have to keep in mind that at the end of it all I will be married to the love of my life and there is nothing else that is more important than that.

In the past few weeks I feel as though I have made some really important decisions... I have signed the photography contract, got the contract for our reception, selected my bridesmaids (you can meet them here) and I said "YES!" to the dress (you can read about me saying "Yes!" here).  It seems like things are moving very quickly and I can't believe that we have already been engaged for two months... it really does seem like just yesterday that MD popped the question.

To follow our journey to our wedding you can follow our blog at www.markandelizabeth.org where we will both be posting information about the wedding as well as our thoughts throughout the whole process.
Written by Unknown at 10:18 PM No comments:


July 2012
~ Mom & Dad Visit: At the beginning of July my parents decided that they were going to come visit me down in West Chester for the first time since we moved there.  I was super excited to have them come visit, but at the same time was a bit nervous for it.  I wanted the house to be perfect and of course that didn't happen, so needless to say I was a little stressed while they were there.  The visit was a lot of fun... we did lots of touristy things which I enjoyed.  Went into Philadelphia where we went to Independence Hall & the Liberty Bell, took my first trip out to Lancaster, PA and went to see a few wineries along the way. All in all it was an awesome visit with them and I was super glad that I was able to show them around where we live. 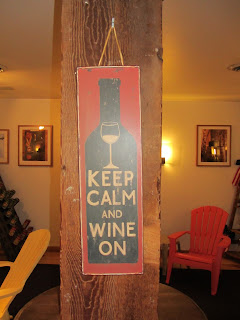 ~ KR's Bridal Shower: The week before the dreaded Pennsylvania Bar Exam my old neighbor from NJ had her bridal shower.  KR (KM at the time) is someone I have known her entire life.  We grew up across the street from each other in NJ and she was always like a little sister to me.  I had been cursed, blessed, with a little brother, so if was great having someone close to my little brother's age living across the street so that I could pretend like I had a sister.  The bridal shower was a ton of fun... a great break from all the studying that I had been doing.

~ PA Bar Exam Take #3: I don't really have much to say about this except for I studied my butt off again and still didn't have what it took to pass the exam.  Not really sure what my next move is here....

~ Visiting Lancaster with MD: After another stressful summer, MD and I decided to take a day trip out to Lancaster. I had so much fun when I had gone out there with my parents what MD thought it would be fun if we went together.  There was so much that I didn't get to do with Mom & Dad that I was excited for another chance to go out there and explore.  This time the theme of the trip was "trains" as we visited the Pennsylvania Railroad Museum as well as a trip on the Strasburg Rail Road.  There is still so much more that I would like to do out there, although I have recently become addicted to the show "Amish Mafia" which is set out in Lancaster, so I am not sure if we will be taking a trip out there again any time soon!


August 2012
~ Party at ML's house: ML loves to throw parties at his house.  He hosts a few parties there every year and they are almost always a good time. More often than not we are all drunken messes and it is an escape from reality for a night (sometimes even 2).  This time was no exception, a great time was had by all... well almost all.  MD & I ended up getting into a HUGE fight over something really stupid and the night ended with me in tears and not speaking to MD for a few days.  Thankfully we eventually talked it all over and things ended up being ok with us, but it was still a terrible end to what was otherwise a really fun night with some amazing friends.

~ KD & KD's Wedding: I think when KD and KD got engaged it was one of the happiest days for me ever (well minus my own engagement night)! KD and KD had been dating on and off since we were at Pascack Valley and I always said that I thought the two of them would end up together.  Going to their wedding was exciting because I had seen there love grow so much over the years.  I felt so incredibly blessed that they asked us to be there to share in their special day with them. KD and KD are truly amazing people and I love that I can say that I have been friends with them since our high school days because I feel like many people don't still have some of the same friends from high school til now.

September 2012
~ LM & RM's Wedding: 11 Years of Friendship, 7 years of dating, and FINALLY MARRIED!!!!!! LM & RM's wedding was a long time coming and it was amazing to be able to share in their special day.  During our time at Bucknell I always assumed that the 2 of them were dating, but according to them they really weren't.  When they finally announced that they were a couple all I remember thinking was "It's about time" and when they finally got engaged I feel like I had a similar reaction.  LM and RM are definitely one of our favorite couples and we were thrilled to be able to share in their special day with them. They had a gorgeous wedding filled with so much love.  Plus we were able to see so many of our favorite Bucknellians all in one place!  It was so special to see the two of them married and we are looking forward to all the milestones their marriage will see!!

October 2012
~ KR & DR's Wedding: I have know KR for her entire life and when she and DR got engaged I couldn't have been happier for her.  KR is such a kind and loving person that she deserves true happiness which I am glad that she found with DR.  It was so moving to see her get married and to see the love and happiness in her eyes, her new husband's eyes, as well as her family's eyes.  They were married in our hometown of River Vale and had their reception at The Greycliff (the same place one of my besties is getting married at next year).  Everything was beautiful and a good time was had by all.  Plus I learned that my mother loves to dance which makes me really excited for my own wedding this year because I know that she will be out there on the dance floor with me!


~ Make-A-Wish Foundation Walk for Wishes: The Make-A-Wish Foundation has been an important part of my life ever since joining Chi Omega back in the fall of 2005. Chi Omega is nationally affiliated with the charity and there is nothing more rewarding than being able to help grant the wish of a child who has a life threatening illness. This year I participated in the Walk for Wishes with some of the lovely ladies from the Philadelphia Area Chi Omega Alumnae Chapter.  It was great getting to know these ladies and getting to walk for such a good cause.  The walk was located at the Morris Arboretum in Philadelphia which proved to be a gorgeous spot for the walk and definitely some place that I would like to go back to visit in the future!

~ Philly Brewery Tour via Trolley with MD: After the Walk for Wishes, MD and I headed into Philly to go on a Living Social Adventure where we toured three breweries in Philly.  Since as most of you know we love beer, it was an awesome experience for us and I would definitely recommend it to people!  We toured three breweries in Philly and each one was a different experience.  First stop was Triumph Brewing Company.  Triumph was fun although we had already tried some of the beers there when we visited Triumph in Princeton, NJ with my family.  Next stop was Brauhaus Schmidtz which was so cool because the place was decked out for Oktoberfest...not to mention they had fabulous beer.  Last stop was Yards, which was a lot of fun because we have had many of their beers to drink so it was cool to see their brewhouse at work. Overall it was a fun experience and I would definitely like to go back to some of the breweries at a later date!


~ Eastern State Penitentiary with the Famous Dave's Crew: Famous Dave's seems to have more of a sense of comradery than many places and I have worked and they quite often do activities together.  This fall we took a group trip to Terror Behind the Walls at Eastern State Penitentiary.  A great time was had by all, and for once I found something to be less scary than it actually was because of the fact that some of my (drunk) co-workers were scared beyond belief so I just couldn't stop laughing at them all. 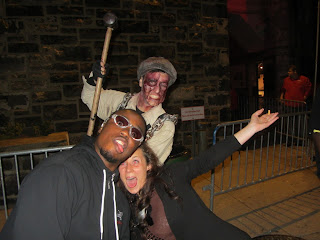