Well folks, we are coming down to the wire.  Only a few more weeks left until the wedding.. 15 days to be exact... I can't believe it!  So much has gone on this past month that I feel like I have barely had time to breathe, let alone blog.  Yesterday I let you all in on the main reason for why I haven't blogged much in the past month, and today I am putting that behind me so that I can tell you about one of the most amazing things that has gone on in the past month.

On September 14th my bridesmaids, along with my mother, threw me the most PERFECT bridal shower a girl could have ever asked for.  These women put so much time and effort into planning the perfect day for me and I can't even put into words how much it all meant to me.  Seriously the day was beyond PERFECT (am I overusing the word perfect here... because seriously I don't think these is any other word that could be used to describe it), and I don't think I could have asked for anything better.

The weekend started on Friday when one of my fabulous bridesmaids, CS, came to West Chester to pick me up on her way to NJ to the shower all the way from Virginia.  I had originally planned on taking the train home because MD was unable to take Friday off from work and we didn't want two cars up there, but since CS was already driving this way she graciously volunteered to pick me up.  It was so nice to drive up with her as we don't get to see each other very often, so it was fun to spend an uninterrupted 2.5ish hours together in the car.  I was also really excited for CS to "meet" my mom (they don't remember meeting each other in the past... even though they have totally met twice I think!) because they had communicated so much via e-mail to make sure that the shower went exactly as planned.  We made it to NJ with no problems and made plans to get together for dinner for pizza at my parents' house once a few more people arrived!

Dinner Friday night was awesome... so low key and relaxed... just what I needed!  My mom's roomie from college had come up early to help with preparations so she joined us for dinner as well as CS, my maid of honor AW and one of my other bridesmaids SP.  We all had such a great time catching up (and for some just plain getting to know each other).  We were all up fairly late just chatting and it really was nice to see everyone from the different stages of my life getting along, relaxing, and just having a good time with each other.

We had a gorgeous day for the shower which was amazing because the plan was for the shower to be outside under a tent that my parents had rented for the occasion.  Setup for the afternoon began early... I think most of us were awake well before 9am.  Two of my amazing bridesmaids, SP & AV, had actually spent the night at my parents' house, so after some coffee they were good to go with getting ready.  Next think I knew AW was there dropping stuff off, followed shortly thereafter by CS, followed shortly thereafter by a bunch of my mom's friends.  We had so many people helping to get ready I didn't know what to do! 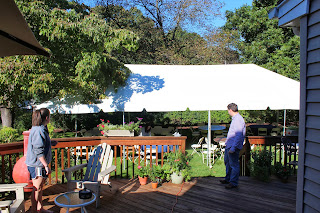 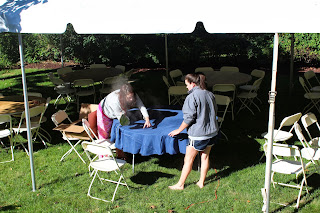 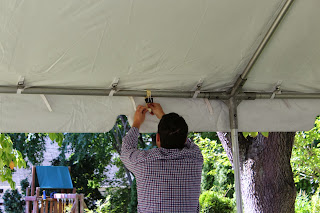 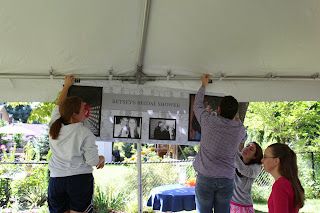 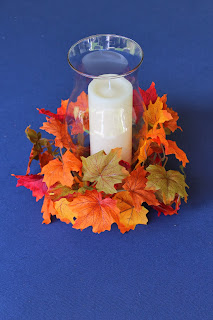 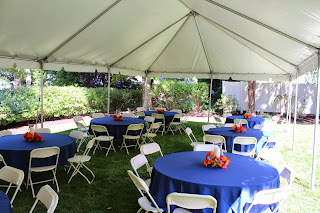 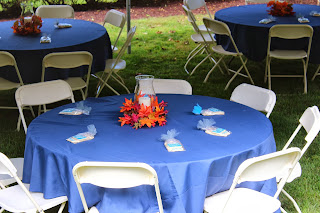 I had wanted to help set up for the shower, but everyone kept shooing me away.  Thankfully I had anticipated that, so I had made an appointment with my neighbor, who is also my florist, to discuss flowers for the wedding.  It was great getting to meet with Mrs. Ruesch and to figure out what exactly it was that I wanted for my flowers.  As much as I thought I didn't know what I wanted, I found that the moreI talked to her, the more I did know what I wanted, just had to figure out how to put it into words.  By the time we had finished getting all the flower stuff taken care of, it was time for me to head home and get dressed for the shower!  By the time I was dressed and ready, the guests had already begun to arrive! 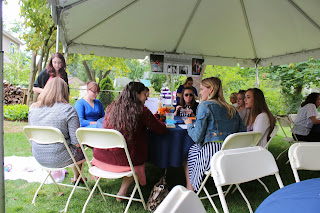 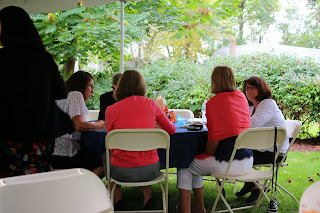 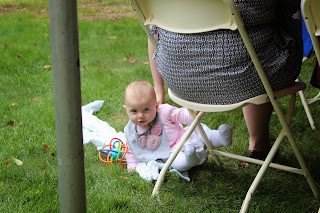 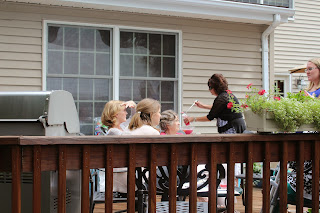 My mom, my bridesmaids, and my mom's friends put together an AMAZING luncheon. Everyone who cooked made such delicious food and the catered wraps were also fabulous.  The amount of time, effort and energy put into cooking such fabulous food... I can't even imagine.  All I  know is that everyone throroughly enjoyed the food!  I was also very excited for Mom's famous champagne punch!  This punch was the one thing I specifically requested for the shower because I remember my parents serving it at New Year's Eve parties when we were growing up as kids and the adults all always seemed to love it.  I have to say... the  punch was worth the wait (or maybe it wasn't worth the wait and I should have tried to swipe some from parties when I was underage!).  The punch was definitely a hit... and I knew everyone would love it as much as I did. 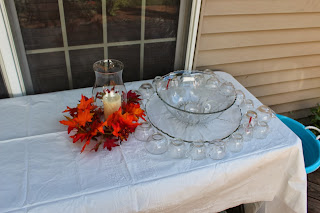 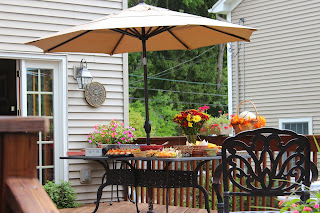 Before lunch my bridesmaids had prepared some fun trivia games for my guests to see how well they knew me.  It was definitely really interesting to see everyone's responses to the questions.  It also made me question the fact that my all time favorite color is pink... most people seemed to think it was the combination of orange and blue (hmmm... I wonder why... "Ray Bucknell!!).  It was also interesting that most people thought that Mark had wrestled in high school (not going to lie, I originally thought he did too... but nope, I was wrong).  Once the games were over the food was set up for lunch and everyone dug right in!

After lunch it was time to open some gifts... it is incredible how much amazing stuff Mark and I received from everyone.  It will be so nice to finally go through all of our stuff and to get rid of everything that we have from our college days and start fresh!  It was also a lot of fun watching how into "Bridal Bingo" all of the guests got. Everyone was paying lots of attention in an attempt to get bingo! 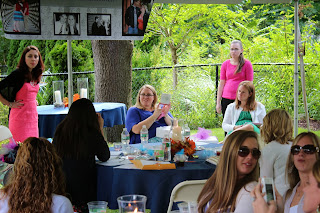 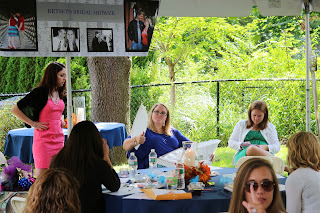 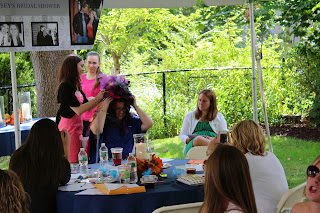 After the gifts it was time to cut our cake.  By that time Mark was back from going out to lunch with my dad and the other guys, so everyone thought it would be fun if we gave cutting a cake together a try.  Let's just say, if my shower is any indication of how things are going to go at the wedding... WE ARE DOOMED.  Trying to cut the cake with Mark I could NOT STOP LAUGHING... it took forever to get myself under control so that we could finally make a single cut in the cake.  Then of course I notice that Mark, the delinquent that he is, had stuck his finger in the icing and was heading to try and put it on my face.  Thankfully I still had the knife in my hand and well let's just say he thought twice about coming near me with the icing.  Everyone got a good laugh out of the situation and there are definitely some funny pictures of the two of us during the entire encounter. 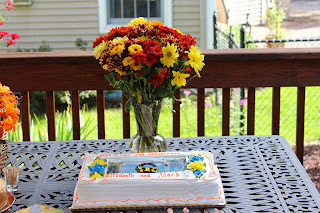 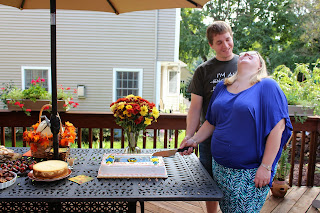 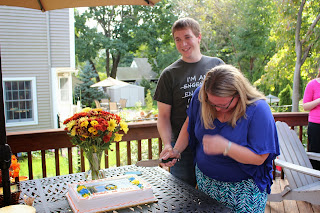 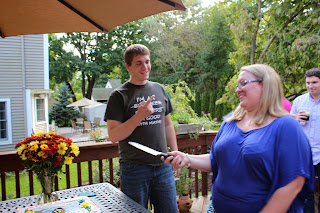 I was definitely overwhelmed by the outpouring of love by all of my family and friends who made the trip to celebrate my bridal shower with me.  I had friends from as far sound as Maryland and Virginia, friends from Pennsylvania and Delaware, friends and family from all over New Jersey... all there to celebrate with me.  I felt so incredibly blessed to have so many people who care about me there to celebrate our upcoming wedding.  Seriously, words cannot express how much the shower meant to me. 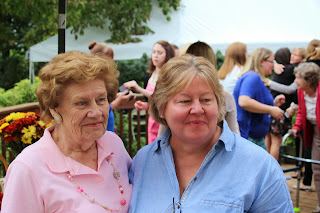 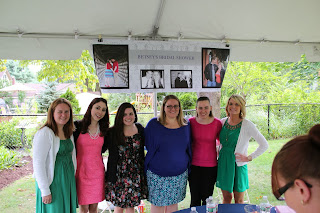 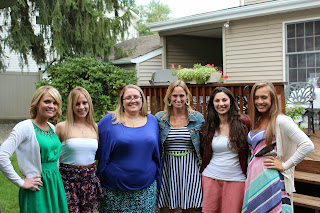 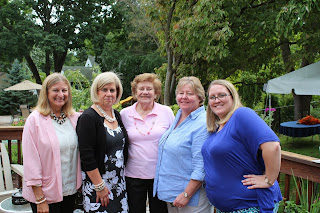